Bullfighting was first introduced during the second half of the War of Reconquista by men who carried the responsibility of maintaining social order in the Iberian peninsula, among the three distinct religions present there, Christians, Jews and Moors. The introduction of bullfighting into the Spanish culture had extremely positive effects, including:

The Iberians, who were the first inhabitants of Spain, idolized the bull and it was an extremely important figure in their mythology. The bull itself was seen as a mythological god in the Iberian culture, with the bullfight being the religious drama where a God, the bull, is adorned and sacrificed for humanities salvation.

The first bullfight was held in Spain in 1107 in Avila. When bullfights first became popular in Spanish culture, only knights or members of the upper strata were allowed to partake in the fight. At this time, bullfights were still very infrequent and tended to occur around the same time as religious holidays.

The actual origin of the bull has been disputed by many, as today there is such a long lineage of bulls that its difficult to trace back to the beginning. Some argue that the Lidia breed (the ‘fighting bull’), has been around since the three religious colonies (the Jews, Christians and Muslims) lived in the Iberian Peninsula. As the popularity of bullfighting began to grow, so did the level of breeding specializations which took place: 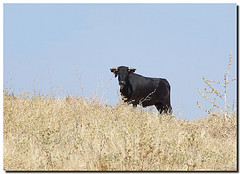 The Lidia bull being raised on a farm 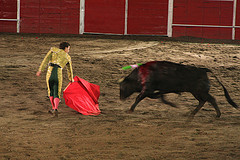 Lidia bull in the bullfighting ring